At the beginning of this new year there was a bit of a brew ha ha as people got all worked up about a comedian on an annual special coming out in Blackface. The theme was cop shows and movies, thus one of the leads wanted to be Axel Foley, which could only be done in full make up. Take a gander: 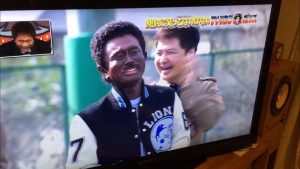 It set people off. I have had this conversation with Japanese people before and they just don’t get it overall. Most people see it as emulation or imitation as a form of flattery and any explanation to the contrary is received with confused looks. Not sharing or understanding that history makes the issue difficult to understand.

Here is an interesting side note. There is this famous person in Japan who is primarily famous for being really tanned, which Japanese people often refer to as “black”. That was enough for him to get his own chip line:

See that white blotch? Those are his teeth. They’ve clearly darkened him up with make up, but they are’t trying to imply that he is mimicking a black person. Does this fall into the same category? I honestly have no idea. When they do a white frosted or yogurt covered chip we can explore my outrage.